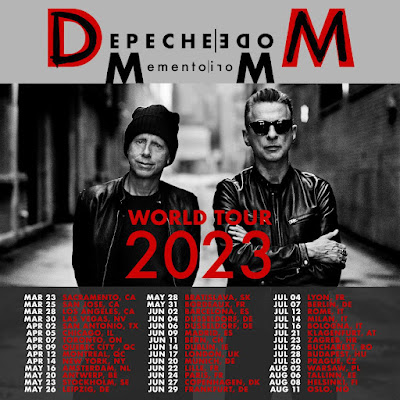 Depeche Mode held their press event in Berlin earlier today. The 20 minute event began with a short video featuring clips from inside the studio and a snippet of new music. Later Dave Gahan and Martin Gore were interviewed and discussed what they've been up to.

The album is titled Memento Mori, which translates roughly into "remember you must die." According to Gahan and Gore, the album title and other details behind the album were decided before the untimely passing of Andrew Fletcher. Gore feels the album title fits perfectly in a "live each day to the max" kind of way.

Memento Mori will be coming out at the end of March; Gore says they are "far into the recording process" but the album hasn't been mixed yet. They've been working in Santa Barbara and will mix the album in New York. They've worked in different studios this time around, which makes it less strange for them - Gore said that if they worked in their previous studios it would have felt way worse without Fletch's presence.

The album got its start during the pandemic where Gore and Gahan would email ideas and parts back and forth. Eventually over the last year or so the songs took shape and they began the recording process. The themes to the songs were directly impacted by the pandemic, though Gahan also feels that in a general sense songs are always kind of evolving and take on different meanings as times change. Gahan and Gore were both emphatic about Fletch's spirit being present in the studio and said that Fletch's death gave the songs and album a different meaning.

Along with the album announcement, they announced details behind a world tour. The tour will kick off with a handful of dates in North America, then heads to Europe for more shows, with a stadium European tour planned for the summer. Tickets for the North American dates go on sale this Friday, October 7th.

View the dates for the tour below and head here to watch Depeche Mode's video event.