Video/setlist: Morrissey rocks out in Phoenix for first show of 2022 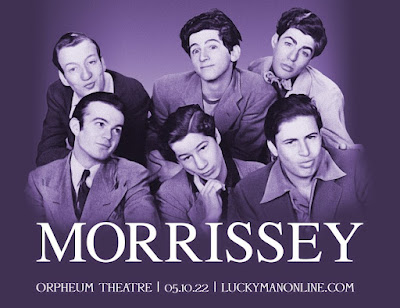 Morrissey returned to the stage in fine form last night.

The legend played his first show of 2022 at The Orpheum Theater in Phoenix last night. According to fans who were there, Moz knocked it out of the park and then some. His voice was strong and mesmerizing, his band was solid, and the setlist was swoonworthy. Morrissey played lots of fan favorites from his solo catalog and plenty of Smiths classics too, with "Sweet And Tender Hooligan" closing out the show. As expected, Moz premiered a new song "I Am Veronica" and during the introduction to the song, he revealed to fans he'll be releasing the single soon:

Moz looked splendid - he was decked out in a suit and rocked a bow tie, and his spirits appeared to be very high. He seemed thrilled to be back on stage doing what he does best. What a treat for fans who were able to attend the show.

Moz and his band are off tonight but will perform again tomorrow in San Luis Obispo, and this weekend he'll headline both nights of the Cruel World Festival.

View the setlist and watch more fan-filmed footage of the show below.

We Hate It When Our Friends Become Successful
Disappointed
Knockabout World
Once I Saw The River Clean
Never Had No One Ever
Alma Matters
Little Man, What Now?
Everyday Is Like Sunday
I Am Veronica
Half A Person
The Loop
I Know It's Over
Suedehead
Have-A-Go Merchant
Irish Blood, English Heart
Rubber Ring
First Of The Gang To Die