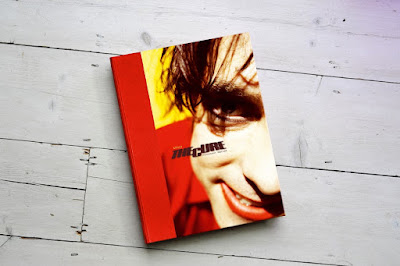 A new photo book collecting pictures of The Cure has been announced.

The 256 page book Stills compiles 291 images (216 color and 75 black and white) of The Cure captured by photographer Paul Cox from 1980 through 1999. A limited edition of photo book will be released - containing the 256 page book, set of 12 color photos in a debossed folder, a poster, and two bookmarks.

Robert Smith approved the project and participated in its creation. Smith issued this comment about Stills:

"As this book shows, the 'look' of the various incarnations of The Cure, through many different periods, is inextricably linked to Paul's pictures; his vision, expertise and patience played a huge part in portraying us, not just as we wanted to be, but as we really were.

An excellent photographer, and an excellent man...and a very good job he wasn't put off by the very weird job that was The Cure on Top Of The Pops in 1980!"

Stills will arrive this September (exact date tba) and is available to pre-order here. A portion of the proceeds from sales of the book will be donated to Doctors Without Borders.

Be forewarned, the shipping for the book is a bit on the high side - almost as much as the book itself. Fans have already contacted Robert Smith about it on social media and Robert has replied:


I HAVE ASKED ABOUT THE HIGH "STILLS" POSTAL CHARGES... WILL POST ANY INFO THAT I GET (HA!) X