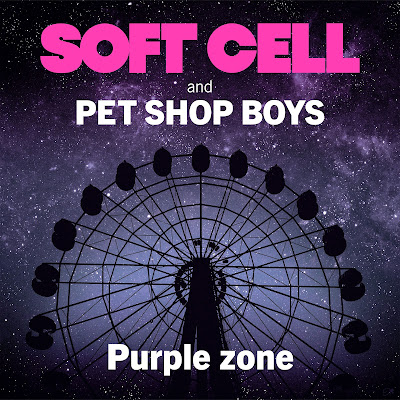 Soft Cell originally wrote and recorded a version of "Purple Zone" and planned to issue it on their new studio album Happiness Not Included. However things turned out a bit differently than planned.

Last year, Pet Shop Boys went to see Soft Cell perform in London and were captivated by the song when Soft Cell performed it. After the show Neil Tennant told Soft Cell he was blown away by the song and it was decided that Pet Shop Boys would do some remixes of the track. One thing led to another and eventually "Purple Zone" turned into a full-on collaboration with Marc Almond and Neil Tennant sharing vocals, and Dave Ball, Tennant, and Chris Lowe weaving triumphant and classic synth moments throughout. The new collaborative version of "Purple Zone" was issued today as a single and will be the version included on Happiness Not Included.

Soft Cell and Pet Shop Boys are completely over the moon about the collaboration:

Marc Almond: “Working with the Pet Shop Boys was a pleasure, and this track is the perfect combination of us and them."

Pet Shop Boys: “We are thrilled to collaborate with such an inspirational duo as Soft Cell on this gorgeous song.”

Soft Cell will issue Happiness Not Included, their first new album in 20 years and their fifth studio album overall, on May 6th. Head here to view all the pre-order options.