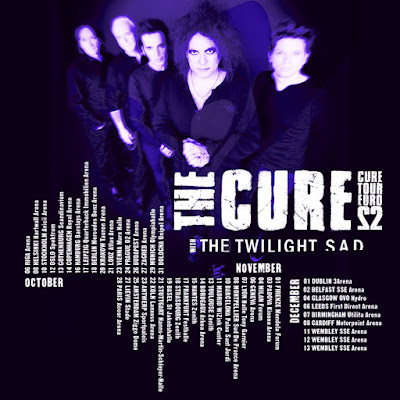 Robert Smith has told fans on social media that he has an "overwhelming desire" to release a new album.

His revelation was part of a three-tweet set he made yesterday, which he seemingly created to calm fans down. Earlier in the week The Cure added a third Wembley show to their previously announced European tour, which caused an outcry among Cure fans in other areas hoping for tour news.

Smith took to the tweeter once again to confirm that, yes, there will be Cure dates outside of Europe, but they will not be announced until everything is organized and ready to go. This shouldn't come as a shock since Smith said exactly that last year when the European tour was announced, and had warned fans that dates outside of Europe wouldn't be until sometime in 2023.

Smith's comments didn't end there yesterday, because he went on to address the new Cure album by stating that "we will be performing songs from a new album when we next play...or we won't be playing at all! And I really want to play...so that means...it means my desire to release a new album is overwhelming."

Smith threw down the gauntlet to himself, thrusting a deadline upon himself to finally get that record out. As Cure fans are well aware, Smith has a bit of trouble with perfectionism and deadlines to the point that it gets in the way of his releases, whether it's a Cure release, solo album, or collaboration. Maybe giving himself a public deadline is what he needs to finally get a new album out.

As it stands right now, The Cure's European tour kicks off on October 6th, but it is possible they could play some festival dates this summer, which would move up the album deadline a bit. Stay tuned.

IN ANSWER: YES, WE WILL BE PLAYING A LOT OF OTHER SHOWS IN PLACES THAT ARE NOT EUROPE... BUT THERE DOESN'T SEEM MUCH POINT ANNOUNCING ANY MORE THAN THAT UNTIL WE ANNOUNCE ACTUAL DATES... WHICH WILL BE VERY SOON X

WE WILL BE PERFORMING SONGS FROM A NEW ALBUM WHEN WE NEXT PLAY... OR WE WON'T BE PLAYING AT ALL! AND I REALLY WANT TO PLAY... SO THAT MEANS... X

...IT MEANS MY DESIRE TO RELEASE A NEW ALBUM IS OVERWHELMING! X