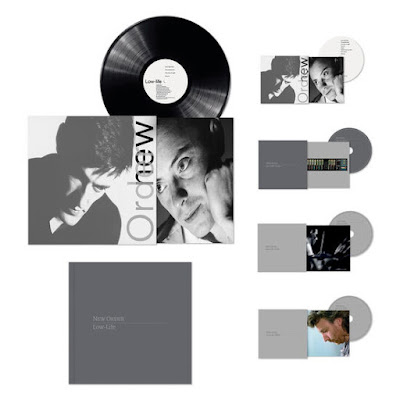 A five (2CD/2DVD/1LP) piece boxset celebrating Low-Life, New Order's beloved third album will be released in January. Like the previous definitive editions for Movement and Power, Corruption, and Lies, the Low-Life Definitive Edition includes a remastered edition of the album on CD and vinyl along with previously unreleased material and vintage live recordings.

Though the official tracklisting hasn't been announced, they've announced that the set includes the original album pressed on vinyl with original tracing paper sleeve; CD 1 is a remastered edition of the album and CD2 collects unreleased material such as demos, rough mixes, etc; the two DVDs are live performances from 1984 and 1985. Additionally a 48 page hardback book with photos and a new interview with New Order is included with the box.

Low-Life Definitive Edition and the singles arrive on January 7th and are available to pre-order now. Head here to view pre-order options.

The Low-Life Definitive Edition is set for release on 27th January 2023. The collection includes an LP, 2 CDs, 2 DVDs, a 48 page book and features unreleased rare material across the different formats and new sleeve designs. Plus, new Low-Life merch which is available now 1/2 pic.twitter.com/92mRipebcI