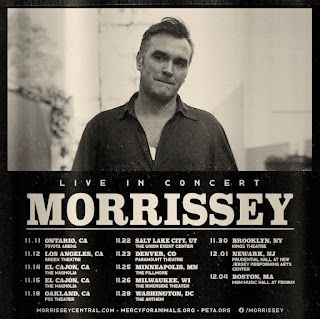 Morrissey has released a new single.

"Rebels Without Applause" is the first single from the forthcoming album Bonfire Of Teenagers. Morrissey debuted the song live earlier this year, and the studio version is now available to stream. The processing on the track gives it a decidedly different sound than the live version with Morrissey's rich vocals. Stream the track below.

Meanwhile a new video interview with Morrissey - his first filmed interview since 2015 - will premiere at midnight tonight (11/28 @ 12am) on You Tube. According to Sam Esty Rayner (Morrissey's nephew), Moz will discuss the new album among other things. The interview was recorded October 9th in London and was directed by Rayner.

Morrissey is scheduled to resume his U.S. tour tomorrow night in Washington DC at The Anthem.