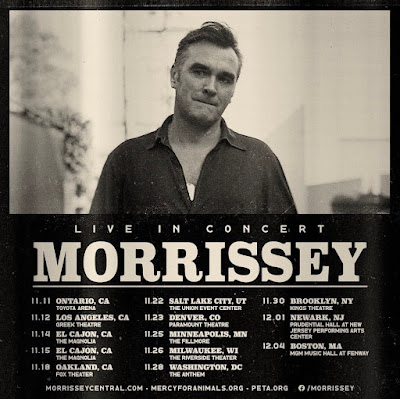 The eleven track album was recorded last year and has been finished for some time, however Morrissey didn't want to release the album without a record deal. He debuted a few songs from the album at his Vegas residency and recent UK tour, which left fans buzzing with excitement. During his show in Manchester earlier this month, Morrissey told the crowd that the album would be coming out soon. He wasn't kidding.

Yesterday Morrissey announced that he's signed a deal with Capitol and Bonfire Of Teenagers will arrive in February (exact date TBA) worldwide with the exception of the UK, where he remains without a label deal. Additionally Capitol has secured the rights to reissue several other Morrissey albums - Southpaw Grammar, You Are The Quarry, Ringleader Of The Tormentors, Years Of Refusal, and World Peace Is None Of Your Business. The albums will will available in deluxe vinyl/LP formats.

More details on Bonfire Of Teenagers and the reissues will be announced at a later time, however fans can check out Morrissey's album announcement here.

Morrissey returns to the stage to kick off his U.S. tour on November 11th. View the tour itinerary below.