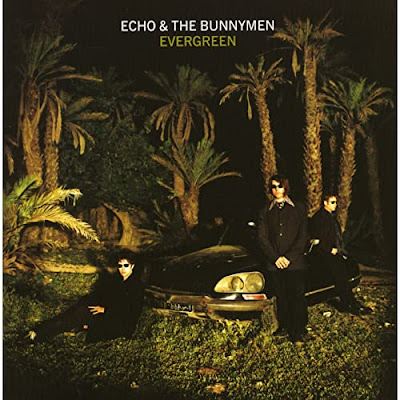 Echo And The Bunnymen announced the release a 25th anniversary edition of Evergreen.

The band's 7th studio record Evergreen was originally released in 1997 and was an exciting moment for Echo fans as this was the record that reunited the heart of Echo - Ian McCulloch and Will Sergeant. At that point in 1997 there had been a long gap between Echo's previous record Reverberation (1990), plus Reverberation was a bittersweet record; Ian McCulloch had parted ways with Echo and the record featured a replacement vocalist. A few years after Reverberation was released McCulloch and Sergeant reunited for their Electrafixion project but eventually decided to fire up Echo again and released Evergreen as their comeback record.

Evergreen turns 25 years old this year and to mark the anniversary the album will be reissued in two formats; a limited edition white vinyl pressing, and an expanded double CD version. The double CD features 33 tracks, expanded with b-sides, live versions, radio sessions (including three acoustic songs from a Detroit radio session), and more.

Both editions are scheduled for a November 18th release and are available to pre-order here.

View the tracklisting for the double CD edition below (the vinyl pressing features the first 12 tracks).