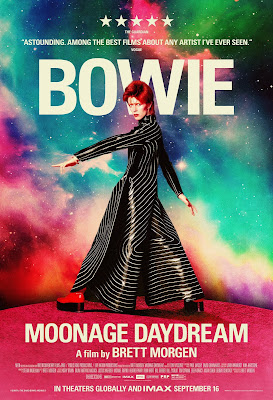 Moonage Daydream, the first officially sanctioned David Bowie film is set for global release on September 16th. The film, directed by Brett Morgen, premiered earlier this year at Cannes and those who have seen it have LOVED it. The film is hailed as a cinematic audio-visual space odyssey celebrating David Bowie and his art, music, and films and features previously unseen concert footage of Bowie.

View the trailer for Moonage Daydream below.

Meanwhile David Bowie's 12th studio album 'Heroes' turns 45 years old in October. To mark the milestone, Bowie's archive will issue a 45th anniversary edition of the album. The limited edition release will be pressed on grey vinyl and will be available exclusively in record stores (brick and mortar stores, not online) and will be released on October 14th.

Head here to read more about the release.