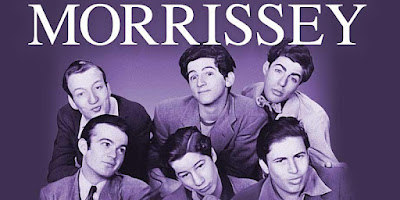 The legend returned to the stage for the first night of his five night residency. Moz looked to be in fine form as he belted out a show filled with classics from the Smiths and his solo catalog. Additionally, he debuted several tracks from his forthcoming album Bonfire Of Teenagers, and confirmed that the release of his record is still unknown.

"I haven't been lying to you over recent years when I tell you there is a new album. There really is. It will be released in your lifetime...so please don't die soon."

Of the new songs, "Rebels Without Applause" was a highlight - the track features a Smiths-esque vibe with Morrissey namechecking Generation X and X-Ray Spex.

Along with "Rebels Without Applause," Moz debuted "I Live In Oblivion," "My Hurling Days Are Done," "Sure Enough, The Telephone Rings," and the album title track "Bonfire Of Teenagers," which is about the 2017 Manchester Arena bombing.

View the setlist and fan filmed video from last night's show below.

We Hate It When Our Friends Become Successful
Our Frank
Billy Budd
Knockabout World
Disappointed
I Am Veronica
Half A Person
Bonfire Of Teenagers
Everyday Is Like Sunday
Rebels Without Applause
Never Had No One Ever
Sure Enough, The Telephone Rings
My Hurling Days Are Over
I Live In Oblivion
That's How People Grow Up
The First Of The Gang To Die
Irish Blood, English Heart
Jack The Ripper
How Soon Is Now?