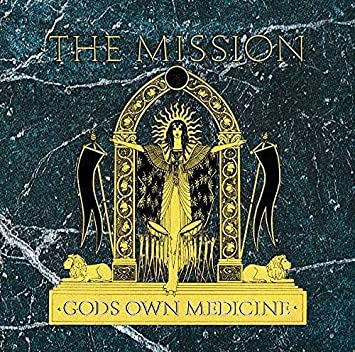 The book, titled Heady Daze covers The Mission's years 1985 - 1990 and follows the release of Salad Daze, the 2019 memoir which covered Hussey's musical journey up to The Mission. Hussey says Heady Daze was originally intended for release this year, but he got sidetracked with other things like, you know, making music and touring! The book is now expected to be released in April 2023.

Though some issues are still to be determined, including selecting the book's cover art, Hussey has opened up pre-orders on The Mission's website. He plans to issue a standard and deluxe edition, but isn't quite sure at the moment what extras will be added to the deluxe. He says fans can pre-order the standard version now and when he announces the deluxe, any pre-orders can be upgraded at that time. Though some details are still up in the air, Hussey said he opened up pre-orders because listings were already up on bigger sites (Amazon, etc.) and he's hoping fans purchase directly from The Mission's website instead.

Head over here to read Hussey's statement about Heady Daze and to pre-order.

The Mission will be touring on and off for the remainder of 2022. The previously announced Deja Vu tour with The Chameleons plays North America in September and October. Dates are posted below.