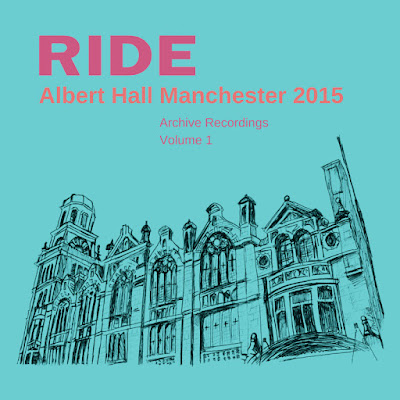 A few weeks ago Mark Gardener tipped fans off on social media that he was currently working on remastering audio from a 2015 Ride show. Yesterday Ride formally revealed all the details behind the release, which serves as the first offering in their newly launched series of archival recordings.

The live album, titled Albert Hall Manchester 2015 - Archival Recordings Volume 1, was captured May 23rd, 2015 at Albert Hall in Manchester. The release boasts an impressive setlist featuring 18 songs and epic versions of Ride classics including a sprawling 8 minute version of "Drive Blind," a mashup of "Chelsea Girl" with The Stooges' classic "I Wanna Be Your Dog," and a shout out to Manchester royalty The Smiths, The Stone Roses, Oasis, and New Order before launching into a swoonworthy version of "Vapour Trail." Magnificent stuff. The album Albert Hall Manchester 2015 - Archival Recordings Volume 1 is available to stream and download through Bandcamp.

Keep in mind this is just the first release in the series! According to Ride, fans can expect more "great live shows, exclusive and rare recordings" so stay tuned for more brilliance.

Meanwhile Ride previously announced plans to reissue their classic EPs as a new compilation titled 4 EPs, plus reissue seminal albums Nowhere and Going Blank Again on November 4th. All three releases have been pressed on colored vinyl and are available to pre-order here.

Finally, as a reminder, Ride's Nowhere concert film is set for a global virtual premiere October 28th through Moment House. Head here for details and tickets.