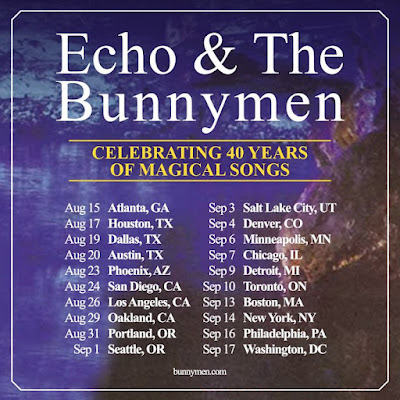 Echo And The Bunnymen bring their 40th anniversary tour to North America this summer.

The critically acclaimed 40 Years Of Magical Songs tour mesmerized fans in the UK and now a North American leg has been announced. Fans can expect a career spanning set filled with the brilliant, beloved, and yes - magical songs that made us fall in love with the seminal band.

The legendary Ian McCulloch is psyched to bring this exciting tour to North America:

"I can’t wait for this upcoming tour of America and Toronto. It will be a continuation of the U.K. tour we did in February/March of this year which was my favourite ever tour, and talking to fans and friends after shows and reading loads of brilliant comments from Bunnymen and Bunnywomen, all saying pretty much what I was feeling,…that some new magical ingredient had been added to the starlight and the moonbeams and the angels and the devils that live inside the songs.

I love, and the band love, touring around America at any time but the experiences of special night after special night in the U.K. makes me certain we will take the shows up another level or two in the U.S.A."

The tour kicks off in Atlanta on August 15th and rolls through St. Andrew's Hall in Detroit on September 9th. Pre-sales kick off tomorrow (Wednesday, May 18th) with the general onsale to follow on Friday, May 20th. Visit Echo And The Bunnymen on the web for more info and view the tour itinerary below.

Echo And The Bunnymen - 40 Years Of Magical Songs