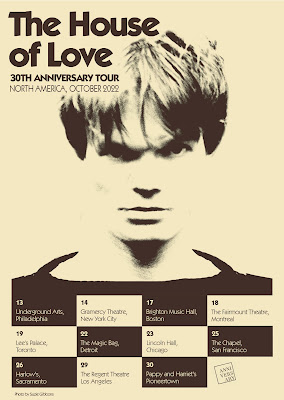 The House Of Love announced dates for a 30th anniversary North American tour.

The legendary band originally planned to play North America in 2020, but the tour was canceled due to the pandemic. The tour has now been rescheduled and includes some cities that were previously excluded, including a Detroit area stop at the Magic Bag in Ferndale on October 22nd. Tickets for the tour are on sale now. Head over to the official House Of Love website to learn more and to grab tickets.

As previously reported Guy Chadwick parted ways with founding members Terry Bickers and Pete Evans prior to 2020, so the lineup for The House Of Love is now Chadwick and a new set of musicians. Chadwick spent time off during the pandemic creating a new House Of Love record titled State Of Grace, which he describes as "the best set of songs I have written in years."

A release date for the forthcoming new album State Of Grace is still to be announced, however The House Of Love will be performing new material along with classics from their brilliant catalog during the North American and UK tours.

For more on The House Of Love head over to the official website here.