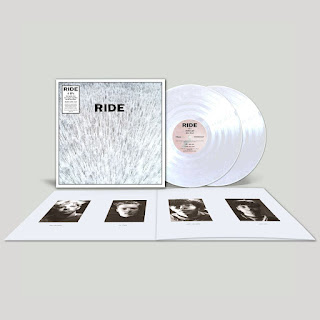 Additionally Ride a new compilation collecting all the material from their first four EPs (Ride, Play, Fall, Today Forever) will be released on double white vinyl with new, but classic looking Ride artwork. The collection is simply titled 4 EPs and includes a 16 page booklet with archive photos.

All three releases arrive on November 4th and are available to pre-order here.

Meanwhile Ride also revealed that a live concert film is set to premiere in October. The short film is a full album performance of Nowhere filmed at Blackwing Studios. The virtual premiere takes place on October 28th. Fans can learn more and obtain tickets here.

Next week Ride head out on the road for a 30th anniversary Nowhere tour in the UK. The 30th anniversary celebration was planned for 2020, however the festivities were delayed due to the pandemic. Ride are said to still be "buzzing about getting back on the road" and are thrilled to celebrate their debut album live, so fans attending can expect a magical experience.