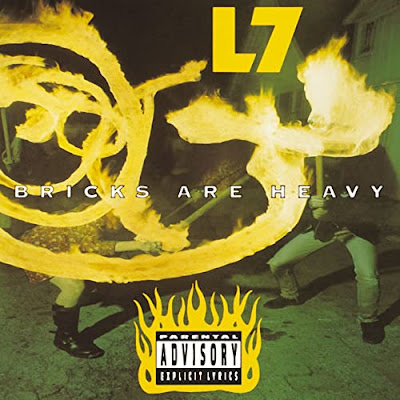 The band's classic album turned 30 years old days ago - it was originally released April 14th 1992. On the anniversary, L7 announced plans to reissue the album on limited edition gold and standard black vinyl. Donita Sparks explains that since the album should have been certified gold by now, they are making their own gold records:

“After all these years, we began thinking it is strange that we have never received a proper accounting of actual sales to date for this record. We were so close to Certified Gold 30 years ago, surely we have crossed the line by now...so we thought to hell with it, we are declaring ourselves Gold and making our own gold records. Get ‘em while they are hot.”

The 30th anniversary editions of Bricks Are Heavy arrive September 30th and can be pre-ordered here.

In October L7 will hit the road in celebration of Bricks Are Heavy and embark on a 30th anniversary tour, which includes a Detroit stop October 14th at St. Andrew's Hall. Tickets for the tour are on sale now.

For more details on the Bricks Are Heavy reissues and anniversary tour, head here.