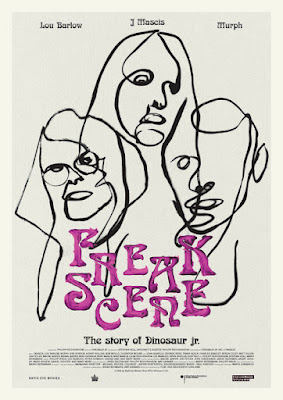 The highly anticipated Dinosaur Jr film is set for a US theatrical release.

Freakscene - The Story Of Dinosaur Jr premiered in several countries last year and is finally going to be available to view in the US. Deadline reports the company Utopia secured the rights to the film and screening dates have been set as follows:

A Brooklyn screening takes place at The Opera House on May 28th with a Q + A and live performance by J. Mascis. On May 31st the film will screen in theaters across the country - for a one night only event (participating theaters to be announced soon). The digital release follows on June 3rd.

The film was directed by German director Philipp Reichenheim, who also happens to be J Mascis' brother-in-law. Reichenheim told Deadline:

"It seems to me retrospectively that when I heard one of the first superb Dinosaur Jr. albums in 1987, my 16 year-old artistic unconsciousness was inspired to make a documentary about them. Freakscene is a visual tribute to the dynamite sound and story of the band and their iconic anti-hero members, and I’m thrilled to be working with Utopia on sharing it with the world."

News of the screening is exciting indeed for Dinosaur Jr fans. View the trailer for Freakscene - The Story Of Dinosaur Jr below.

Dinosaur Jr will be back on the road in the U.S. later this year. View the current list of dates below and head here for more details.