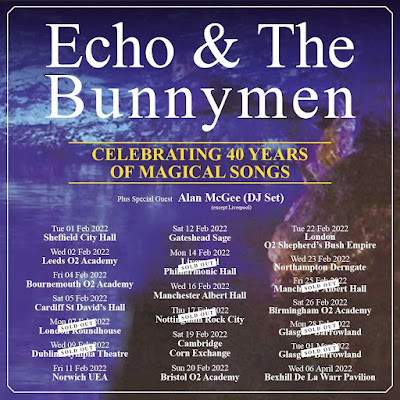 Echo And The Bunnymen's live stream has been canceled.

This week the legendary band launched a UK anniversary tour of sorts, celebrating 40 years of magical songs. Last week Echo announced that their homecoming show, February 14th at Liverpool Philharmonic Hall was to stream live on Facebook, as a live Facebook event. Unfortunately, plans for that have now been scrapped. Echo released the following statement informing fans:

"Due to unforeseen circumstances out of our control, we are gutted to announce that we have had to cancel our planned live stream from the Liverpool Philharmonic Hall on 14/02/22. We are keen to embrace the opportunities live streaming offers us and you. Currently, we are exploring some exciting opportunities which we hope to share later in the year. Facebook will process all refunds."

The live stream was scrapped, but the tour marches on with a show tonight in Cardiff. Let's hope plans are in the works for a North American tour filled with these brilliant magical songs.