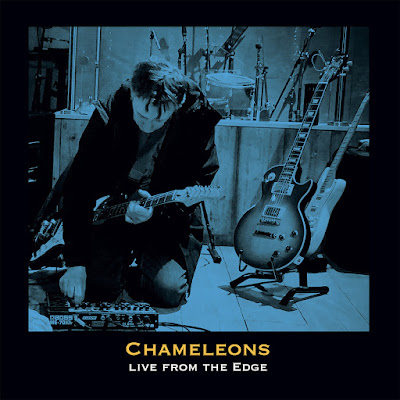 A new release from Chameleons is coming in April.

The Chameleons launched in 1981 and released three brilliant and highly influential albums Script Of The Bridge, What Does Anything Mean? Basically?, Strange Times, before breaking up. After dissolving, the members went on to launch other projects including The Sun And The Moon, The Reeges, and ChameleonsVox over the years, with Mark Burgess' ChameleonsVox being the longest lasting of these projects. ChameleonsVox had been a very active touring band prior to the pandemic sidelining everything in 2020.

Last May founding members of The Chameleons Mark Burgess and Reg Smithies reunited and performed a set of Chameleons classics live. Seven songs from the performance were captured live and will be released as Edge Sessions (Live From The Edge) and will include 3 bonus ChameleonsVox live recordings.

What's more is the current version of the band, now known as Chameleons (no The, no Vox) has signed to Metropolis records. Metropolis will release Edge Sessions (Live From The Edge) on April 15th on variety of formats including limited edition 2LP black vinyl, CD, and digital. Head over to Bandcamp to pre-order.

Chameleons hit the road in North America later on this year as part of the Deja Vu tour with The Mission and Theater Of Hate. Tickets for the tour are on sale now.